Mohamud Ali: from Manchester’s roads to football history with Somalia 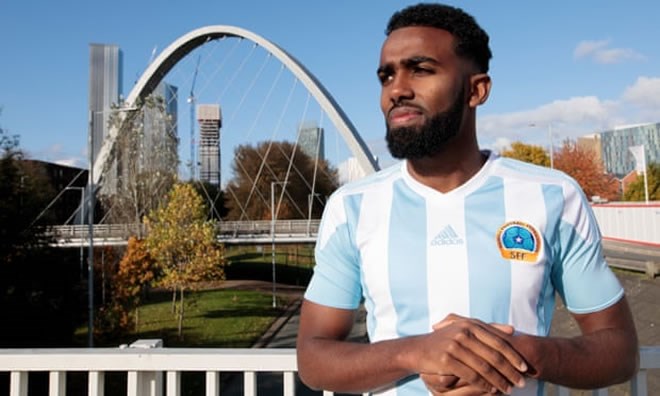 Curzon Ashton’s Mohamud Ali, pictured in Manchester, says: ‘At the final whistle that’s when we started to realise how big an achievement it was.’ Photograph: Jon Super/The Guardian

A hot night in Djibouti City, 5 September, and Mohamud Ali is in disbelief at having just written himself into Somalian history. The former £50-a-day factory worker was man of the match as his nation beat Zimbabwe 1-0 to record a first World Cup qualifier win. Ali is thousands of miles away from his home in Manchester, where he plays as a central defender for Curzon Ashton of the National League North and his day job is a driving instructor. But now the 25-year-old is a bona fide national hero.

Because of the political instability in Somalia, the Ocean Stars had to play the “home” leg of this Qatar World Cup 2022 first-round qualifier in neighbouring Djibouti’s El Hadj Hassan Gouled Aptidon Stadium. The match was level until the 87th minute when Ahmed Ali, Mohamud’s brother and Somalia’s captain, floated a cross from the left and Anwar Shakunda headed past Elvis Chipezeze.

At the final whistle Ali and his teammates sank to the turf in contemplation of what they had achieved. Somalia had lost their previous 19 matches across eight years. The sequence was broken with seven debutants against a side ranked 90 places higher who made the last Africa Cup of Nations finals, a competition in which Somalia are unable to participate because of their limited resources.

In a coffee house on Manchester’s Stretford Road, Ali’s eyes light up. “Before we weren’t thinking about our record, we were thinking about giving a good account of ourselves and get the win,” he says. “At the final whistle, that’s when we started to realise how big an achievement it was. I was celebrating on the pitch, me and my brother being able to celebrate together was amazing.

“Then going back to the hotel in the team bus with music playing, everyone dancing. As soon as you get to the hotel you turned the wifi on and the phone was booming. All night you’re speaking to family back home.” Ali believes Zimbabwe underestimated a young XI that was a mix of diaspora – a consequence of the troubles at home – and Somalia‑based players. Ahmed Ail was then at Doha’s Pearl FC but is now back in Manchester and a free agent. The match-winner, Anwar, making his debut, is at Elman FC in Somalia’s capital, Mogadishu.

Ali says: “We all just met there and then. Some of the players flew out one day or two days before the game. Some were there already there in the training camp in Djibouti. We arrived at the stadium at the same time as Zimbabwe and could see by the way they were getting off the bus singing, dancing, that they were underestimating us.”
Advertisement

Ali’s journey began in the Netherlands after his family fled their country during the civil war that ran from 1991-2006. “My parents are Somalian but I was born and raised in Netherlands,” he says. “I’ve got two older siblings who were born in Somalia but there was a war going so we had to leave and we decided to go to Holland. I played there for a season semi-pro, made my first-team debut for Alphense Boys,” he says of the club located in Alphen aan den Rijn in the western Netherlands. “Then we came to Manchester seven years ago, when I was 18.”

Ali talks of a drive to better himself. “The first six months I wasn’t playing, it was very tough,” he says. “Then I signed for Northwich Victoria and in my second season had my debut for Somalia – in 2015, against Niger. But when I came back I struggled to get back into the team. Then the manager [Jim Gannon] left for Stockport County and you know how it goes with football. So at the end of that season I signed for Glossop North End.”

Ali also faced a fight to find employment. “The qualifications I had back home, I couldn’t transfer them so I had to do GCSEs, start all over again. I was at college and I decided to try and just get a job and play football, so I started working at a factory for a guy I know and playing non-league. I was packing and sending stuff out for £50 a day.

“I was only working on Sundays initially and getting paid from football as well, so I had £150 a week. It wasn’t a lot but I was living at home with my parents. I was going to the gym nearly every day, trying to get higher up the ladder. Then one of my friends, who owns a driving school, said: ‘I’ve got this opportunity for you. Are you interested?’ I’m thinking: ‘I’m only getting one day a week at the factory, I’ve nothing to lose,’ and I was trying to pursue a career in football and it’s quite a flexible job.”

Four years on Ali remains content. “I still enjoy what I’m doing but at this time I’m focusing more on football,” he says.

After the victory against Zimbabwe there was a harsh return to reality. “I came back on the Friday and on Saturday we had a game but I didn’t expect to be playing,” he says. “I was knackered and we got beat 4-0 but I got man of the match.

“I then rested, saw my family but on my second day back working I had a new client, who said: ‘Are you a footballer?’ I said: ‘I literally just came back from international duty. I play for Somalia.’ And he knew the captain from Zimbabwe, Alec Mudimu, who lives in Manchester.

“He goes: ‘You played against Alec? I was watching the game. I can’t believe my driving instructor is a footballer.’ It was funny. Other students messaged me while I was there saying: ‘Amazing, I’ve seen you on the BBC, congratulations.’

“That was nice. You realise how big your achievement was. It was massive and people back home are saying you are a legend. I’ve never been to Somalia but I know if I do go I’d be welcome. I’ve got family that have moved back and they’re saying it’s fine but we hear stories of suicide attacks, bombings, stuff like that so I wouldn’t go back just yet myself.

“My mum was so proud – speaking to me and my brother after the game. Honestly, they’ve made a lot of sacrifices leaving Somalia to give us a better life and to be able to celebrate this with my family was sweet.”

Somalia lost the return leg 3-1 in Zimbabwe, conceding two late goals, and so were knocked out. But Ali can always be proud of his role in a moment that will remembered for a long time in his country.