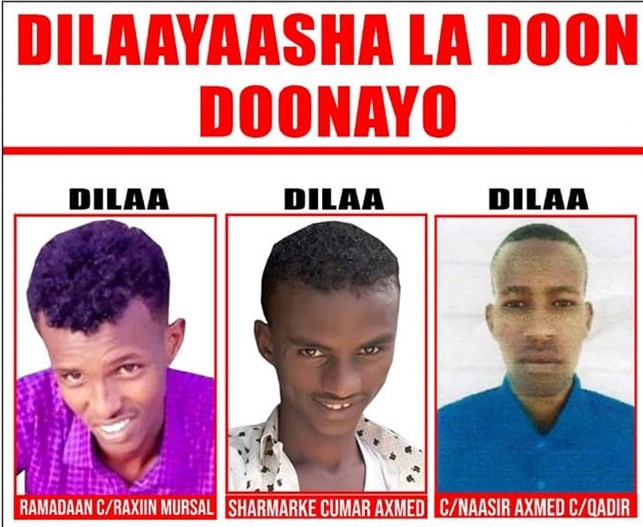 MOGADISHU (HOL) – Police is Somalia have put an unspecified bounty on five Al-Shabaab militants who were sentenced to death and life in absentia by a military court in Mogadishu early this month.

Security agencies identified the four- Ramadan Abdirahin Mursal, Sharmarke Omar Ahmed, Abdinasir Ahmed Abdiqadir, Abdullahi Kuusane and Abdirahman Mustaf Abdillahi and called on members of the public to forward any information about them.

Police did not indicate the bounty but called for public information ‘to spare the blood of fellow Muslim’ adding there will be a financial reward.

The announcement was first put out last week in a TV programme on Somali National Television which featured one of the Al-Shabaab militants on death row Mohamed Haji Ahmed Ilkaase.

A military court sentenced Ilkaase to death on January 1 together with the four to face death
while the fifth, Abdiqadir was sentenced to life imprisonment for the murder many people including army generals.