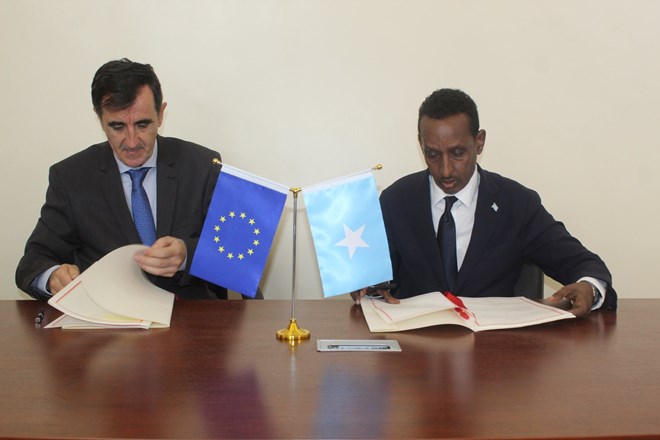 MOGADISHU (HOL) –  Somalia has signed an agreement with the EU to bolster maritime security in the country through capacity development of Somali maritime units.

According to a statement from the Ministry, the agreement ‘sets out the framework and co-operation of the European Union and Somalia, in line with the important security and stability plans for developing the psychological capacity to enhance maritime security in Somalia.’

The agreement is to be implemented by the EUCAP Somalia whose mandate is the establishment and capacity building of maritime civilian law enforcement capability in Somalia, including Somaliland.

EUCAP Nestor was formed in 2012 in response to piracy in Somalia with a mandate over the Horn of Africa and the Western Indian Ocean. However, its mission was reviewed in 2016 to focus solely on Somalia.

EUCAP has also been involved in police training jointly with AMISOM and Somali Police Force.

A group of 385 police officers under the joint training graduated in South West late December while another batch of Darwish unit started training in Mogadishu last week.