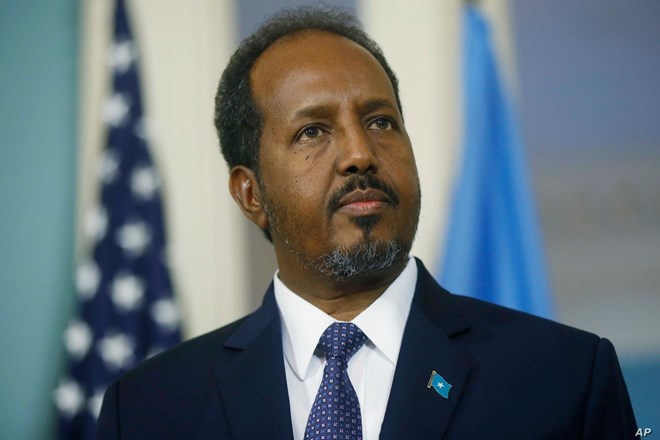 MOGADISHU (HOL) – Somalia’s former President Hassan Sheikh Mohamud has demanded the Federal Government come clean on the recurrent delays in the maritime case with Kenya noting the public was in the dark over the matter.

Addressing the media Wednesday in Mogadishu in the wake of a new round of postponement of the oral proceedings by the International Court of Justice, President Mohamud said President Mohamed

Farmaajo must explain to the nation ‘what is happening.’

“Four years ago, when we left, the issue of the sea was three times delayed. Our government always tells us that it is against postponement it but the government has never shared [this issue] with the public,” said Mohamud.

The former head of state who is also UPD party leader said it was time President Farmaajo addresses the nation on the matter. “We were hoping the president would come before the people and tell them what was happening.”

Mohamud who was succeeded by Farmaajo in 2017 also took issue with Kenya’s excuse for the third delay of the case on grounds of the ongoing COVID-19 global pandemic. Coronavirus just came the other day, Mohamud charged adding this was ‘just flimsy excuse’.

In its argument for delay, Kenya cited inconveniences and challenges occasioned by COVID-19 eve as Somalia fronted for online hearing of the case.

Kenya said in its submission to the Court its newly recruited lawyers were based in different European countries thus would not be able to coordinate in the case while in their respective locations.

“A virtual hearing in current pandemic conditions would be unfairly aid irredeemably prejudicial to Kenya,” the submission read in part.

Somalia had argued holding the proceedings via video conference would cover for the need to appear in person.

“Somalia stands by its proposal that the upcoming oral hearings be held by video conference and hereby respectfully reiterates that doing so would be a better way to balance the competing interest at stake than again postponing the already long-delayed oral hearings to an uncertain future date.

The Court granted Kenya’s wish and set the hearing for March 15, 2021.