Eleven candidates are running to join a council facing police reforms, a major budget shortfall, a homelessness crisis and more. 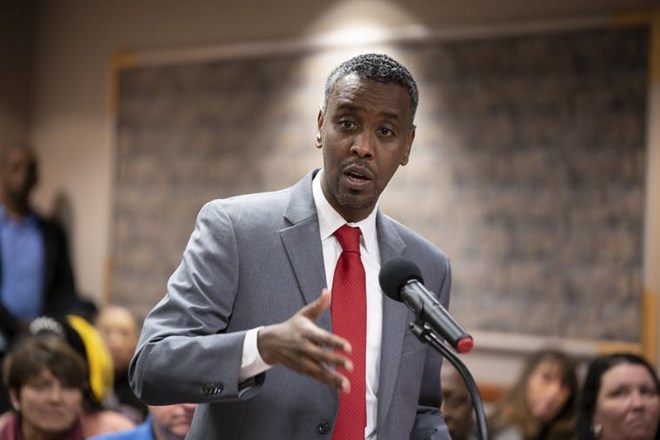 Minneapolis’ sole municipal election this year is a race to fill a City Council seat in one of the most diverse pockets of the city, which has been without representation since April.

Eleven candidates are running in a special election for the Sixth Ward seat, which was vacated when former council member Abdi Warsame resigned to lead the Minneapolis Public Housing Authority this spring. Whoever is elected would have to run again in November 2021, when all council seats are once again up for election, to keep the seat.

The Aug. 11 election is ranked choice, with voters able to select three of the listed candidates in order of preference.

The elected candidate will take office as the council contends with the coronavirus pandemic and the aftermath of the death of George Floyd, who was killed by Minneapolis police officers on Memorial Day. The council has already had to make budget cuts and will likely see even deeper spending cuts next year.

The council is also faced with questions on how to rebuild areas devastated by riots and how to reshape policing in the city, all the while holding public meetings from remote locations.

Some of the effects of the city’s turbulent year can be most deeply felt in Sixth Ward, which includes the neighborhoods of Cedar-Riverside, Elliot Park, Phillips West, Seward, Stevens Square and Ventura Village.

Those neighborhoods include some of the highest concentrations of coronavirus cases in the city, according to data collected by the city. They also include parks where dozens of homeless people have set up camps following the pandemic and uprising surrounding Floyd’s killing.

The Sixth Ward is the city’s smallest and most densely populated district, where nearly 90% of residents are renters, according to a city profile. The ward has higher concentrations of Black and Latino residents and a greater unemployment rate when compared to the rest of the city.

There is a generational divide among candidates. Some, such as Bihi and Shaie, have long histories with the ward and are well-known among its East African community. Others are newcomers to local politics.

At virtual and in-person forums over the last few weeks, the candidates have fine-tuned their positions on several pressing issues facing the city.

Most support either disbanding or restructuring the Minneapolis Police Department, in line with what the City Council is currently doing. They agree that addressing the current surge of homeless encampments is one of the city’s key priorities, as is supporting small businesses impacted by the coronavirus pandemic and the riots. Most identify with the Democratic Farmer Labor party or otherwise describe themselves as progressive.

Dougherty, director of the Thomson Dougherty funeral home in the Phillips West neighborhood, said he is running to offer pragmatic solutions as the city deals with severe budget woes. He does not support defunding the police department, and said he would like for Police Chief Medaria Arradondo to have a greater say as the department outlines its future.

“We’re in crisis,” Dougherty said at a League of Women Voters Minneapolis forum earlier this month. “And I think right now, in a moment like that, we have to leave politics, ideology, out of it. We need common sense, measurable results. Pragmatism.”

Bihi, director of the Somali Education and Social Advocacy Center, is touting his long experience in Cedar Riverside and serving in other neighborhood committees.

“I have two decades of experience of really doing the work, and not only that, living in the ward,” Bihi said during a virtual forum Monday. “I did not move to the ward, I do not have just [an] address.”

Yet other candidates are countering that experience, arguing that Cedar Riverside has continued to suffer from poverty, crime, drug use and disinvestment during that time.

“Bihi has been in the community for a long time, but at the same time it’s under the watch of 20 years, going on to three decades now, that the community has been deteriorating,” Awed, an independent party candidate, said at the same forum. “They’re really looking for a next generation of leadership that is going to be able to bring in the policy questions that really matter.”

Shaie, the co-founder of the Ummah Project, a nonprofit group working with Somali youth, moved to the ward after an unsuccessful run for a state House seat representing northeast Minneapolis earlier this year. Like Bihi, she is touting her connection to the ward’s residents and businesses.

The candidates are split on their views of Africa Village, a development project pushed by Warsame and Mayor Jacob Frey that would bring an indoor market, housing and other amenities to what is currently a parking lot in Cedar-Riverside. While some are supportive and believe it would bring in needed revenue to the area, others say they first want to get more feedback from the neighborhood before moving forward.

“I want to see Riverside area to be a like an East African district, same way as Chinatown,” said Osman, who works in social services for Commonbond Communities. “Now if you walk, drive around there, it’s not booming as I wish it was. And projects like this, it’s opportunity that comes around [once] in a lifetime.”

Mohammed, a U.S. Army veteran, believed the market would bring much-needed tax revenue to the neighborhood but that other locations should be scouted.

“Cedar-Riverside is a diverse neighborhood, and I feel though that an African development market would be the best thing for our neighborhood, just not in that location,” she said.

Hassan, a Minneapolis Park and Recreation Board commissioner, has received endorsements from Our Revolution Twin Cities and OutFront Minnesota, as well as Hennepin County Commissioners Angela Conley and Debbie Goettel, according to his website.

Engberg, a Humanity Forward candidate, said she is running on a campaign to defund the police department, set universal basic income and fully fund the city’s Section 8 housing program. Palacios, who provides HIV testing and outreach for the Aliveness Project, also said they support defunding the police and learning the safety needs of different neighborhoods.

More than a fifth of the ward’s 15,305 registered voters have already voted in the special election, according to city spokesperson Casper Hill. The elected candidate will likely be sworn into the council at the end of August, he said.

The special election will be found on the back of the ballot for Sixth Ward voters. Polls will be open Aug. 11 from 7 a.m. to 8 p.m. Sixth Ward voters can find their polling location online at pollfinder.sos.state.mn.us.

Miguel Otárola is a reporter covering Minneapolis City Hall for the Star Tribune. He previously covered Minneapolis’ western suburbs and breaking news. He also writes about immigration and music on occasion.