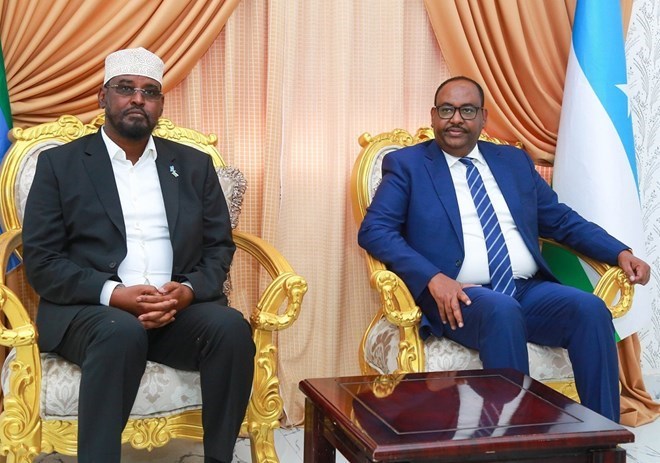 Mogadishu (HOL) – President Mohamed Abdullahi Farmajo has launched the delayed two-day Leadership Consultative Summit on Sunday to discuss the implementation of the September 17 Agreement with the noticeable absence of Jubbaland and Puntland.

The presidents of Galmudug, Hirshabeelle, and South West State met with President Farmajo and Prime Minister Mohamed Hussein Roble.  It is believed that the United Nations Special Representative for Somalia, James Swan, also participated in the talks.

Swan is expected to brief the UN Security Council on Monday alongside AU Special Representative Francisco Madeira and EU Managing Director for Africa Rita Laranjinha in an open videoconference. The meeting will focus on Somalia’s delayed elections and political stability.

Jubbaland Vice President Mohamud Sayid Adan said on Saturday that his administration was willing to participate in the conference but was assessing the security situation after federal government security forces opened fire on demonstrators during an anti-government protest on Friday.

In a statement released on Sunday through Jubaland’s Office of the President, the Jubaland government said that the federal government must meet a series of prerequisites before electoral talks can commence. Most notably, Jubaland demands that President Farmajo not play a role in the electoral process. It also called on the federal government to formally apologize to opposition candidates for opening fire on protestors and suggested a new venue to hold the talks so that all the stakeholders can be present.

President Farmajo convened the conference after the latest attempts at breaking the electoral deadlock collapsed just over two weeks ago. A 14-member technical committee appointed by both the federal and regional governments met in Baidoa this week to iron on details that have hampered the talks in Dhusamareb.