Ilhan Omar interview: Trump is a racist tyrant — but America is strong enough to survive his presidency

‘I’m a woman, I’m black, I’m a refugee, an immigrant, a Muslim and I wear a hijab. And all of those are identities that have been vilified by the right,’ she tells Richard Hall 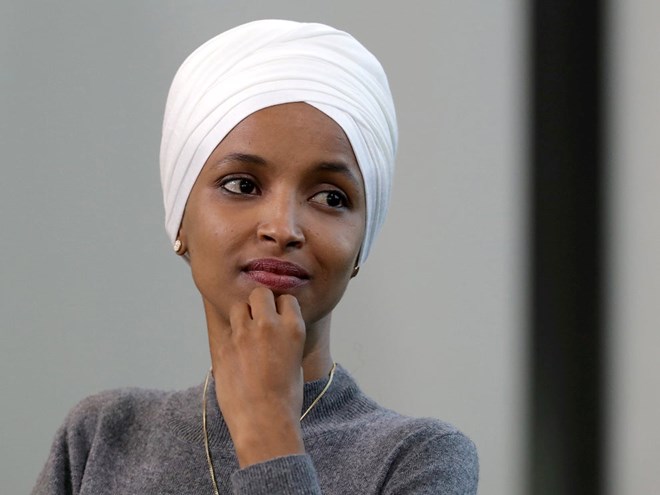 In normal times, Ilhan Omar would be spoken about in a different way. At 37, she is a progressive star with an inspirational story, a young and charismatic congresswoman and national political figure in her own right.

But these are not normal times, and with things being as they are, it is hard to tell her story without also talking about the president of the United States, Donald Trump – a man with whom she shares virtually no attributes, but whose story is nonetheless connected to her own.

That is because the pair represent two very different versions of the American dream. One which prizes ostentatious wealth, excess, bravado and gold-plated bathroom fixtures. And the other: an immigrant success story, and an improbable journey from a refugee camp to the United States Congress.

More than that, they represent two different Americas. Come November, voters will get to choose between them. The unwillingness of so many to accept people like Omar as part of the American story was the driving force that put Mr Trump in the White House in 2016. If he wins again, that sentiment will likely deepen.

The president has stoked that animosity – that racism – throughout his four years in power, turning Omar into a lightning rod for his base. On conservative radio, on Fox News, at Trump rallies, her name is a cue for the two-minute hate.

“I happen to embody multiple marginal identities. I’m a woman, I’m black, I’m a refugee, an immigrant, a Muslim and I wear a hijab. And all of those are identities that have been vilified by the right…  and weaponised by Donald Trump,” she tells The Independent.

“For me, that understanding allows me to be resolved in the ways in which I unapologetically show up, advocate for policies that make our country a more equitable society.”

It’s useful to consider one of the most frequent attacks levelled against Omar, who was first elected by Minnesota’s 5th congressional district in 2019. Tucker Carlson, the Fox News commentator and Trump confidant, has deployed it frequently, framing her journey from refugee to citizen as a gift that should buy her silence. “After everything America has done for Omar, and her family, she hates this country more than ever,” he said last year, and has repeated since. 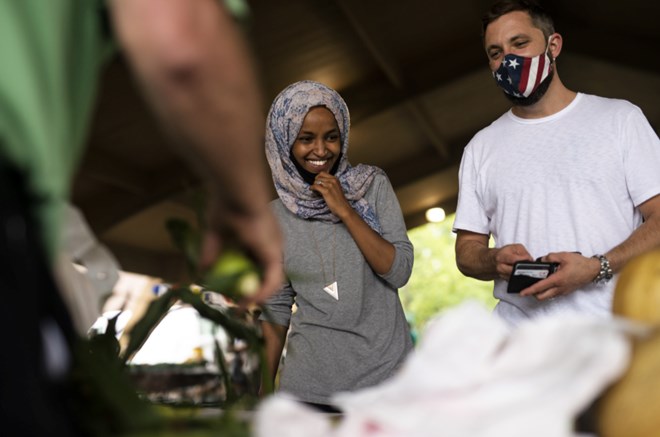 Ilhan Omar campaigns with her husband Tim Mynett at the Richfield Farmers Market on 8 August 2020 in Richfield, Minnesota(Getty)

And yet even in a time of national crisis, when many cannot see beyond the doom of the moment, when democracy is at stake, Omar is remarkably hopeful about its future.

“Of course we’re alarmed with what we are witnessing right now, but there is a distinction between those who have lived with conflict and unrest but have institutions that are strong enough to withstand, and those that diverge into a civil war and become a failed state,” she says.

“I believe we have here in the United States really good institutions that have withstood four years of Trump and can withstand many things. It’s one of the greatest constitutions in the world.”

Omar’s ability to identify the deep, structural problems facing America and still recognise its potential for change has its roots in her own story.

She was born in Mogadishu, Somalia, in 1982, the youngest of seven siblings. Her mother died when she was a child, leaving her father – a teacher trainer – and her grandfather to raise her.

Her family was forced to flee when civil war broke out in 1991. She writes vividly of that early experience of war in her recently published memoir, This Is What America Looks Like: My Journey from Refugee to Congresswoman.

“Suddenly, out of nowhere, we heard massive gunfire and men screaming. Our trip abruptly ended. Chaos immediately broke out in the back of the truck,” she writes of that fateful escape.

“People crawled over one another without regard, scrambling to get out without getting shot. We jumped out of the truck, forgetting to take the few things we had brought with us from home. I was barefoot as we ran as fast as we could towards the makeshift border with the sounds of weapons firing at our backs. The sun was beating down and we didn’t have water, but we kept going.”

Omar and her family managed to escape the country to Kenya, where they lived in a refugee camp for four years. In 1995, they immigrated to the United States, arriving first in Virginia, then two years later moving on to Minneapolis.

Her first years in America were difficult. In her book, she writes about being on the receiving end of racism and bullying, but also of how she learned to fight back (in her book, she describes herself as “small but a good fighter”).

She has also recounted how her initial impressions of America were so different from the one she expected, the one her father had described: a country where everyone had the same chance at success. Her first impression was disappointment.

“This doesn’t look like the America you promised,” she later recalled telling her father. He replied: “Well we haven’t gotten to our America yet, you just need to be patient.”

Omar became a US citizen at 17 years of age, in the year 2000, the same year that Mr Trump ran his first ill-fated campaign for president. Sixteen years later, at 34, she won her first political race when she was elected to Minnesota’s state house of representatives. The same day, Mr Trump won the presidency.

Their victories were both historic, and seemingly at odds. As Omar became the highest-ranking Somali American elected to office, Trump was set on a path which would see him use the power of the presidency to block refugees like Omar ever coming to America. The clash between them was inevitable.

Nearly four years in, does she feel as though the American dream – the one she represents – has been tarnished by the Trump presidency?

“It certainly has,” she answers, pausing for a moment before continuing.

“America… for so many people living abroad, including myself when I lived in a refugee camp, is a place where people do get an opportunity to fulfil their promise. And the idea that the United States has been seen as a place of refuge, as a place where as my grandfather used to say ‘eventually everyone becomes an American’, is now being led by a xenophobic, racist tyrant, who doesn’t understand anything that is fundamental to the American identity – that’s a shock to many people.”

A year after her election to the state house of representatives, Omar summarised her newfound role in an appearance on Trevor Noah’s Daily Show: “I am America’s hope and the president’s nightmare,” she said.

The next year, she ran for the House of Representatives and made history again as she and Rashida Tlaib became the first Muslim women elected to Congress. Omar became the first woman to wear a hijab in the House, which overturned a 181-year-old ban on headwear.

Tlaib and Omar, together with fellow young progressive women of colour Alexandria Ocasio-Cortez and Ayanna Pressley, became known as “The Squad”. All of them became the target of the president’s racist attacks.

But in just a short space of time, they have established themselves by more than just their opposition to Trump. The Squad have become leaders of the progressive wing of the Democratic Party, battling with their own party leaders to move it to the left on key issues. They had the momentum going into the presidential primary campaign (three of them backed Bernie Sanders, while Pressley supported Elizabeth Warren).

In the end though, in these abnormal times, voters saw former vice president Joe Biden as the nominee with the best chance of beating Trump. Omar refuses to see that as a defeat for progressives, however.

“I know that every exit poll in the primary, people supported the policies that we advocate for: ‘Medicare for all’ was polling 60, 70, 80 per cent in every state. Things like cancelling student debt, the Green New Deal, addressing our housing crisis and having a humane immigration system also polled really high,” she says.

“So to me it’s not a rejection of the policies that we advocate for. We know when we are given the opportunity to have a conversation with the people, the people are with us.”

Right now, however, Omar and The Squad are focused on one thing: defeating Trump in November. That task is being made harder by a White House seemingly committed to undermining the integrity of the democratic process. Trump has repeatedly attacked the reliability of mail-in ballots, without providing any evidence, and claimed without reason that the election will be rigged against him.

23 years ago, from a refugee camp in Kenya, my father and I arrived at an airport in Washington DC.

Today, we return to that same airport on the eve of my swearing in as the first Somali-American in Congress. #Hope #Ilhan ?? pic.twitter.com/jVeP3DOipN

Many observers are preparing for the possibility that the president will not step down if he loses. But Omar’s faith in the system is strong.

“The president is really good at doing everything he can to distract from the crisis that he is in: his inability to govern, his corruption, and many of us believe his very presence is a threat to our democracy, which is why he is an impeached president,” she says, listing off the various ways in which the president has attacked the voting process.

“And again, because of the strengths of our institutions we’re seeing states still take action that allows for people to participate [in the election].”

In the midst of all the noise, she believes that voters will hand Trump a defeat in November.

“People at this moment really are awakened to the reality of who this president is. [They are] no longer enticed by the facade of electing an outsider to come and fix Washington,” she says.

“He’s abused the public trust. And in Minnesota, even in some of the places where he had people supporting him, they know that they’ve elected a buffoon and are looking forward to undoing that mistake.”

But she has plans, too, for what comes after Donald Trump. On the first day of Biden’s presidency, should he win, Omar will once again turn her attention to convincing her own party to implement progressive policies that she has long championed.

“That destination is one that pushes the Biden administration on medicare for all, on freeing 45 million Americans from the shackles of student debt, on ending the climate catastrophe that is upon us, and focusing on immigration policies that are humane.

“More importantly for me, a lover of democracy, to do everything that we can to strengthen our democracy so that when someone like Trump is elected they don’t have the ability to threaten it in the way in which he has.”