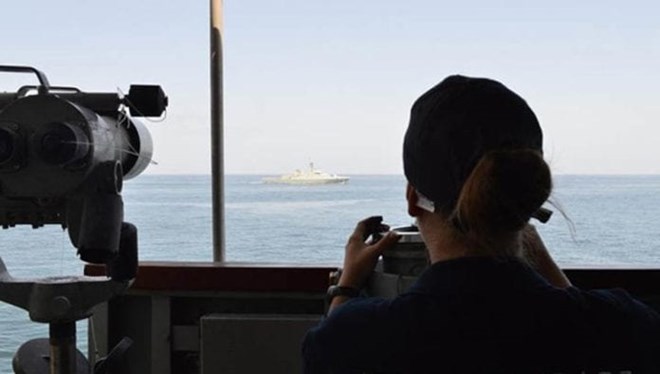 On patrol: a security exercise at sea.

A global maritime body on Wednesday called on foreign vessels to remain vigilant as they transit the Arabian Sea and the Gulf of Aden, saying despite the fall in piracy off the coast of Somalia, danger persists in the Gulf of Guinea.

The latest report by the International Chamber of Commerce’s International Maritime Bureau (IMB) said there were no reported piracy attacks in 2019 and 2020.

In 2018, IMB said three vessels have reported being fired upon in this region including the Red Sea, Gulf of Aden, Somalia, Arabian Sea and the Indian Ocean.

“Although the opportunity for incidents has reduced, the Somali pirates continue to possess the capability and capacity to carry out incidents,” IMB said in its annual piracy report, saying that threat still exists in the waters off the southern Red Sea, Gulf of Aden including Yemen and the northern Somali coast, Arabian sea, Gulf of Oman and off the eastern and southern Somali coast.

In the past, vessels have been attacked off Kenya, Tanzania, Seychelles, Madagascar, and Mozambique as well as in the Indian Ocean and off the west and south coasts of India and west Maldives.

According to IMB, Somali pirates tend to be well armed with automatic weapons, rocket propelled grenades and sometimes use skiffs launched from mother vessels, which may be hijacked fishing vessels or dhows.

Analysts say the drop in piracy incidents is however a relief to shipping companies using the Indian Ocean that had in previous years been the target of pirates, often paying heavy ransom to secure release of their vehicles and the crew.

Meanwhile, 135 crew were kidnapped from their vessels in 2020 globally, with the Gulf of Guinea accounting for over 95 percent of crew numbers kidnapped, the report says.

According to the report, a record 130 crew members were kidnapped in 22 separate incidents.

Incidents in the Gulf of Guinea are particularly dangerous as over 80 percent of attackers were armed with guns, according to the report.

“All three vessel hijackings and nine of the 11 vessels fired upon in 2020 related to this region. Crew kidnappings were reported in 25 percent of vessel attacks in the Gulf of Guinea – more than any other region in the world,” said IMB.