Michael Rubin, a lobbyist pleasing his clients. It is time to debunk his clientelism mission in Somalia. 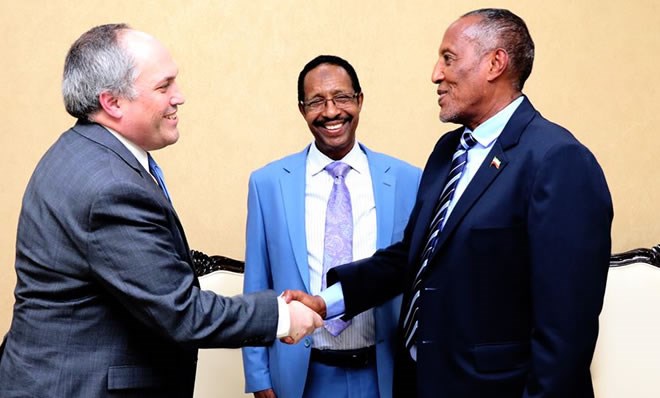 Just over a year ago, Michael
Rubin abruptly started publishing articles portraying Somalia and its officials
with negative and fictitious lenses. On November 16, Mr. Rubin irresponsibly
and erroneously criticized U.S. Intelligence “for bankrolling Somalia’s Intelligence and Security Agency
(NISA) who he accuses of, and its chief, of working with “Al Qaeda affiliate.” It
is irresponsible and fictitious to accuse Somalia’s leadership, especially
those leading the fight against Al-Shabaab for not being allies against
terrorism, when in fact, they are in perpetual struggle, albeit limited
resources to overcome a global phenomenon, as opposed to Michael Rubin, a
sponsored campaigner for Somaliland’s secessionism bid who from the comfort of his
armchair is accustomed to maliciously character assassinating without any
perspective or shred of evidence those he deems to stand in the way of his
quest of Somalia’s disintegration.

Mr. Rubin can lobby for
Somaliland, or any other non-proscribed entity, without engaging in an
egregious lobbying campaign wholly reliant on concocted fictions, which again
show his ignorance and despicable approach to Somali matters. The inescapable
reality is that this lobbyist’s wicked intentions are to damage Somalia’s image
as a whole, regardless of who is in government, as his campaign stretches far
beyond defaming individuals, with the sole purpose of serving
his clients. To
assume that Mr. Rubin is after certain individuals at the heart of the Somali
government is wrong. In reality, he would do the same to anyone working towards
achieving Somalia’s national interest. After all, his prejudiced writings and
vicious smears is a manifestation of someone who routinely speaks from an
oblivion position.

Of late there has been a spike
in the number of cheap foreigners, especially western men, who shamelessly
offer mouth rentals to interfere in Somalia’s internal affairs using all social
media platforms and websites to publish and push through all sorts of warped up
fabricated stories. They go to great lengths to malign, character and engage in
misinformation and mischaracterization campaigns against their clients’
opponents. To demonstrate this, Mr. Rubin’s example as a lobbyist would suffice
to illustrate the extent some people are willing to go to earn a dishonest
living. By drawing from the tainted credibility of his previously published
articles, one could be forgiven to think that the more Mr. Rubin spouts
fabricated slanderous claims, the more he is bankrolled by his check
masters.

Mr. Rubin with his logical
fallacies makes up fairy stale stories to unimpressively urge the United States
to stop supporting Somalia. To achieve this, he publicly decries US diplomats,
public and security services personnel engaged in Somalia’s recovery and
state-building endeavours on unsubstantiated claims of impropriety. Through
alarmist and scaremongering tactics, Mr. Rubin casts aspersions on the
reputation and judgment of US foreign and defense service officials. He never
ceases sending fabricated and confusing messages about US involvement in
Somalia. Claiming the US government has been supporting a Somali government
hell-bent on supporting the same terrorist groups the US spends a fortune to
defeat, in terms of financial and human capital, flies in the face of reason
and serves as a blatant disservice to the daily sacrifices made by thousands of
servicemen, some of whom paid the ultimate price trying to make the world a
safer and better place to live, whereas Rubin is busy recycling same old failed
narratives.

With unimpressive but
sensationalized headlines like “the US and UN are repeating Iraq’s mistakes in
Somalia,” he falsely accuses the US State Department and USAID of “being wrong”
by “wasting billions of dollars” to support “Al Qaeda renaissance in the
strategically important Horn of Africa.” In another shoddy article, headlined:
“Somalia’s president is no ally against terrorism,” he falsely accuses
Somalia’s president of ‘supporting and abating terrorism’. Mr. Rubin’s
unrestrained claims could weaponize terrorists by feeding into their insatiable
appetite for propaganda and their recruitment drives.

Why a privileged former US
Pentagon official like Mr. Rubin, with no predating background knowledge about
Somalia, suddenly develop an interest in Somalia in his sunset years just to
spew hate and disinformation against a country recovering from decades-old
internal strife is anybody’s guess?

Thankfully, policymakers at
Washington D.C. and New York don’t source their information from misfits and
maliciously motivated crooks. They understand Mr. Rubin’s rants for what they
are: a lobbyist for hire who cobbles together unverifiable claims and
tittle-tattle to justify his smearing modus operandi. Mr. Rubin does not hide
his motivations to sustain his war profiteering enterprise at whatever cost.
Mr. Rubin does not bear the brunt of his actions as, for him, the end justifies
the means.

On a closer inspection, what
is evident is that Rubin’s articles can be seen from the prism of a sponsored
political campaigning intended to intentionally misrepresent Somalia’s image
and by extension, its civil servants, without making any effort to present
evidence-based facts, amounts to nothing but a meritless hullabaloo and
political chicanery. This indeed is an act of recklessness and one of a grave
error of misjudgment on the part of Rubin whose unfounded outright
mischaracterizations, and cheap shots against Somalia and its senior government
officials reveal his ulterior motives as a force for hate, division and
bigotry. What has become clear is that the tenets of his core message remain
the same ‘smearing Somali government officials, and defaming them, irrationally
disparaging the US foreign policy, and Somalia’s partnership with the international
community and promoting Somaliland.’ On calling the “US to open a Consulate in
Somaliland,” Mr. Rubin personally attacks Ambassador Donald Yamamoto, a career
diplomat and Horn of Africa expert of immense repute, for “cutting funding for
the Republic (sic) of Somaliland.” This is not only unfair but also a false
characterization of Ambassador. Yamamoto.

Indeed, no such sloppy and
unsubstantiated claims by a discredited former US civil servant would deter
Somalia from its objectives of realizing its fullest potential. And as clearly
demonstrable in his previous mudslinging articles, I am not at all surprised by
his contempt for the very victims of terrorism who pay a huge and damaging cost
for fighting terrorism. This astonishing level of lackluster journalism is an
enormous disgrace to the integrity of journalism. Mr. Rubin’s
mischaracterization and dishonest smear tactics will only embolden Somalia
towards its path of achieving lasting peace and progress. As Michelle Obama
famously said, “as you go low, we go high.”

Warsame O. Hashi is a Security
and Development analyst. He can be reached at [email protected],
Twitter: @warsamehashi