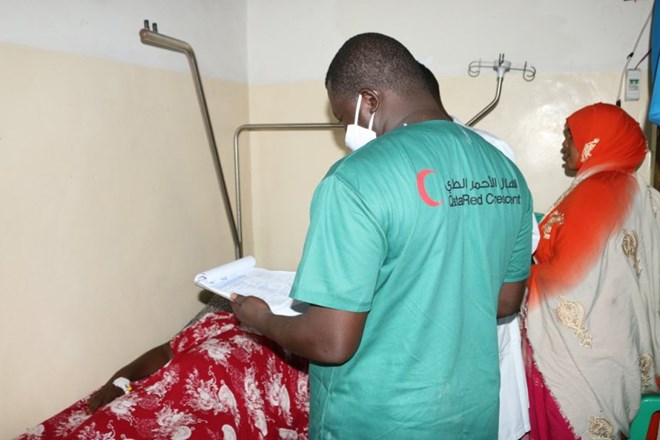 A beneficiary receives treatment under QRCS’s surgery campaign in Somalia.

Over one month, 867 patients were examined and given medications by specialised physicians. The surgeons performed 201 major and moderate operations, including critical and emergency cases that required immediate surgical intervention.

Overall, 51 percent of procedures were major, 43 percent moderate, and six percent emergency. There were 70 operations for women and 131 for children and men.

Faisal Mohamed Al Emadi, Executive Director of Relief and International Development Division at QRCS, said, “The general surgery program is an important part of QRCS’s operations in Somalia. It helps to reduce the impact of war and natural disasters, as well as to reinvigorate the local economy by re-engaging the ill persons into productive activities.”

“Thank Allah; all the patients have recovered after receiving high-quality post-procedure care despite inadequate infrastructure. The delegation of foreign medical professionals made a significant difference in the quality of surgical services. The country is badly affected by the many years of civil war. We are committed to the medical campaign’s program, with plans to involve more hospitals and areas of Somalia, to relieve the pains of underserved patients,” said Al Emadi.

All the medical professionals received in-service training during the campaigns to enhance their capacity and develop new surgical skills. The beneficiaries included internally displaced people (IDPs) affected by war and natural disasters, focusing on the most vulnerable groups such as older persons, widows, and children in many districts in Banaadir Region.

In addition to the surgeries and medical training, QRCS supported the host hospital with medical equipment for surgeries, anesthetics and disinfectants, medications, laboratory tests, and food meals for all patients. Moreover, QRCS undertook the maintenance and furnishing of the hospital.

The closing ceremony was attended by Somalia’s Minister of Health, who commended the remarkable contributions by QRCS in Somalia. She urged more collaboration on such campaigns and valued Qatar’s growing role of standing by the Somali people.