‘She’s telling us how to run our country’: Trump again goes after Ilhan Omar’s Somali roots

The comment, at a campaign rally, was one of the president’s many jabs suggesting that the Minnesota congresswoman is not an American. 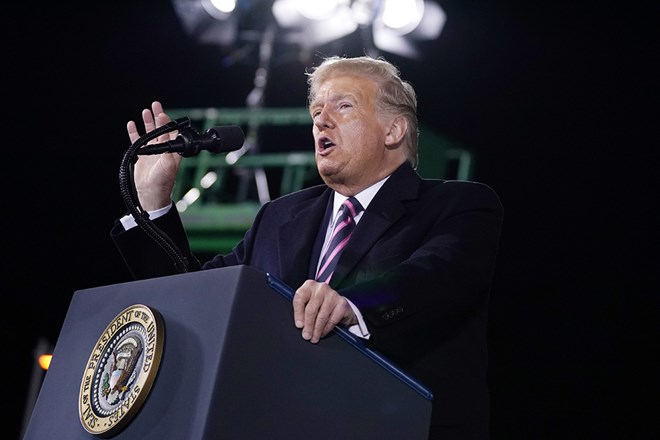 President Donald Trump on Tuesday attacked Rep. Ilhan Omar yet again for her Somali origins, saying the Minnesota Democrat is “telling us how to run our country.”

Omar is a U.S. citizen — a requirement for serving in Congress — and was naturalized after coming to the country as a child refugee from Somalia.

The comment was one of the president’s many jabs suggesting Omar is not an American. Going after her has become almost a staple of his campaign rallies, where he often focuses on her more than other progressive lawmakers critical of the president.

Omar is one of the first two Muslim women to serve in Congress and the first to wear the hijab. She has been the subject of relentless Islamophobic attacks since running for office in 2018.

Last year, Trump called for Omar and some of her progressive peers in Congress to “go back” to “the totally broken and crime-infested places from which they came.” Trump supporters also chanted “send her back” during a rally last year, a line that has become common among his base.

During a rally last week, Trump called Omar an “extremist” and said Democrats wanted to allow into the country Somali and Yemeni refugees who he said were coming from “Jihadist regions.” He also bragged about deporting Somali nationals during that rally, calling them “hardened criminals” who are “back in their country where they can do all the complaining they want.” He held the rally in Minnesota, the state with one of the largest ethnic Somali communities in the country.