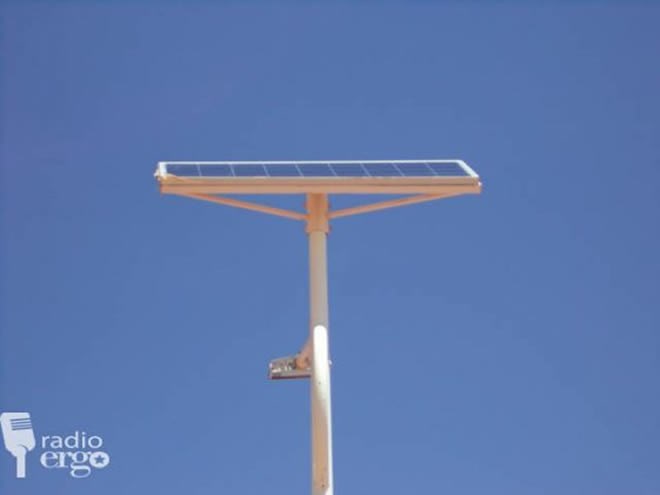 (ERGO) – Small business owners in the central Somali town of Huurshe, 78 kms from Dusamareb, the capital of Galmudug state, say their earnings have increased since solar streetlights were installed in September.

Anab Hassan Ahmed, a mother of 10, owns an eatery along the main road. Her average daily income has risen from $10 to $17.

“Thanks to these lights, I’m getting more customers… they come in at all hours and some stay well into the night,” she said.

The town used to shut down early as few places could afford the electricity sold locally using fuel generators.

Anab told Radio Ergo that the extra income she makes helps her pay the $30 rent and school fees for three of her children.

Abbas Abdi Hassan sells food items like rice, flour, sugar, fruit and vegetables from his market stall. He has increased his hours with the new lighting, earning him an additional $5 at night.

There is another added bonus that his children have a place to study.

“My children join me at the market,” he told Radio Ergo. “I set up a table and chairs for them to study under the lights, with a tutor helping them to revise their lessons instead of wasting time elsewhere.”

Abbas said his two daughters and two sons, all at Sheikh Yusuf Primary School, have improved their comprehension because of the opportunity to study in the evenings.

Huurshe’s town commissioner, Ahmed Nur Abdihamid, told Radio Ergo they knew that other small towns had benefitted from solar lighting and approached the Somalia Stability Fund (SSF) to install them there too.

“Having these solar lights was of utmost importance because electricity was a big problem. Our town used to go quiet as soon as the sun sets,” he said.

Over 40 solar lamp posts have been installed along the main roads, markets and other communal places. This has contributed to security as well as business.

« CAF decides that CECAFA U-20 to be played without fans
Somalia worries that a U.S. withdrawal will be disastrous »