Somalia comes out on top in Kenya sea border judgment 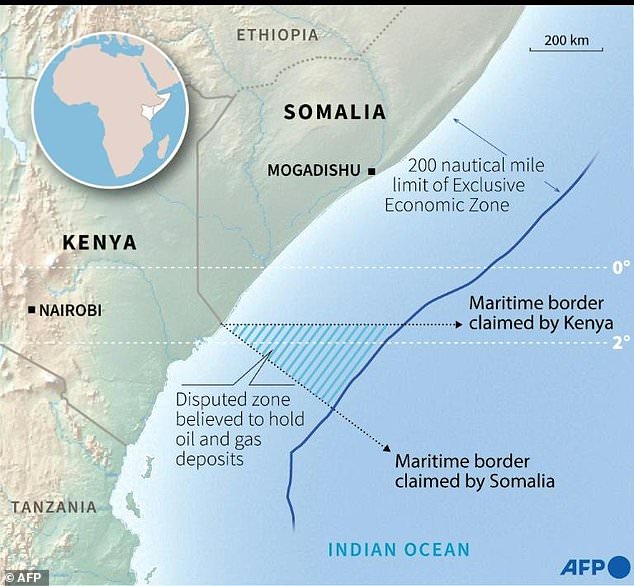 The UN’s top court awarded Somalia control of most of a potentially oil and gas-rich chunk of the Indian Ocean on Tuesday after a bitter legal battle with neighbouring Kenya over their sea border.

The International Court of Justice ruled there was “no agreed maritime boundary” and drew a new border close to the one claimed by Somalia, although Kenya kept a part of the 100,000 square-kilometre (38,000-square-mile) area, chief judge Joan Donoghue said.

Kenya, which had claimed the entire area off the East African coast, said last week that it would refuse to recognise the jurisdiction of the “biased” Hague-based court.

The court’s decision, which is final, could have far-reaching consequences for the future of relations between two key countries in one of the world’s most troubled regions.

Somalia dragged Kenya to the ICJ in 2014 over the disputed patch of sea.

At the heart of the dispute is the direction that the joint maritime boundary should take from the point where the land frontiers meet on the coast.

Somalia insisted the boundary should follow the orientation of its land border and thus head out in a 200 nautical mile line towards the southeast.

But Kenya said its boundary runs in a straight line due east — a delineation that would have given it a big triangular slice of the sea.

The court in the end drew a line passing closer to the boundary claimed by Somalia.

Nairobi says it has exercised sovereignty over the area since 1979, when it proclaimed the limits of its exclusive economic zone (EEZ) — a maritime territory where a state has the right to exploit resources.

The contested 100,000-square-kilometre (38,000-square-mile) area is believed to contain rich gas and oil deposits, and also has important fishing rights.

Rulings by the ICJ, which was set up after World War II to resolve disputes between UN member states, are binding and cannot be appealed.

The court has no overt means of enforcing judgments but can refer violations to the United Nations.

In a similar maritime border dispute between Colombia and Nicaragua, the case went back to court in September after Nicaragua accused Colombia of flouting a 2012 judgment by the court in its favour.

Kenya pulled out of hearings in the Somalia case in March, after unsuccessfully arguing that the court did not have competence over the case.

Just over two weeks ago, Nairobi notified the UN secretary-general that it was withdrawing its 1965 declaration accepting the ICJ’s compulsory jurisdiction.

The Kenyan foreign ministry accused the court of “obvious and inherent bias”.

“As a sovereign nation, Kenya shall no longer be subjected to an international court or tribunal without its express consent,” the Kenyan foreign ministry said.

Somalia then took the matter to the ICJ later the same year, saying diplomatic attempts to resolve the row had led nowhere.

Monday’s verdict may further sour diplomatic relations between the two countries after Kenya in 2019 recalled its ambassador in Mogadishu after accusing Somalia of selling off oil and gas blocks in the contested area.

It tartly reminded Somalia of Kenya’s sacrifices in the battle against Al-Shabaab jihadists.

Kenya is a major contributor of troops to AMISOM, an African Union military operation fighting Al-Qaeda-linked fighters waging a violent insurgency across Somalia.

The post Somalia comes out on top in Kenya sea border judgment appeared first on WardheerNews .