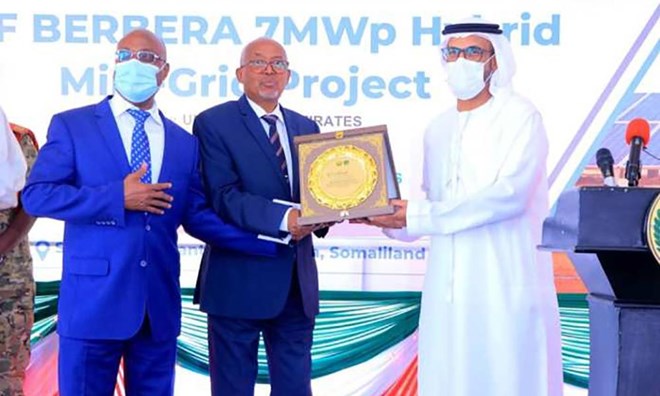 The United Arab Emirates development support of Somaliland continued to increase with the funding of a low-cost solar power project in Berbera, the capital of the Sahil region.

The project worth USD 7.98 Million funded by the Abu dhabi Development Fund will help low income earners and the poor to access power according to the minister.

It will be linked to the district electricity network, in line with the growing demand is aimed to meet the electricity necessities of the Berbera district community, with an estimated population of 50,000 people.

The minister further proposed to the electricity companies that the price of electricity be reduced to $ 0.10 cents per unit.

The project will be co-managed by the Somaliland Ministry of Energy and Minerals and the Berbera power company.

Mr. Mohamed Sayf Al Suwaydi, Director General of the Abu Dhabi Development Fund said: “This renewable energy project in Berbera will play an important role in our large-scale efforts to boost the country’s economy and improve the living standards of the people in this area.”

He added:  “The need for energy is constantly growing in Berbera as the population grows. This project will provide electricity to people at an affordable price, as it will replace the use of expensive fuel with solar energy. This will lead to higher economic activity, access to savings, and reduction of carbon dioxide emissions to provide clean and quality air. This will bring significant and tangible change to the city. ”

Somaliland energy minister Jama H. Mohamud Egal, said the center will play a key role in the efforts to reduce electricity cost and tariffs and dependence on fossil fuels and lead to the availability of savings that will boost people’s income.

“This project will have an immediate impact on an estimated 50,000 people in Berbera district, in addition to its long-term positive impact on the entire nation. It will also help meet the growing demand for business growth in the district as well as the expansion of the Berbera port.”

A Memorandum of Understanding (MoU) will see the transfer ownership of the facility to the Ministry of Energy and Minerals on behalf of the Republic of Somaliland, and appoint a consulting firm, Coretec, to support the Ministry of Energy and Minerals with the necessary guidance needed to establish the overall operational framework for the facility.

The United Arab Emirates is the leading development partner for Somaliland especially in infrastructural development.

The United Arab Emirates Company DP World has invested USD 442 million for the expansion of the Berbera Port which is the largest development project in Somaliland.

Once complete, the Berbera Port will be the most modern in the horn of Africa.

UAE and the Abu Dhabi Fund for Development Construction company is also building the 250 km dual carriageway between Berbera and the Ethiopian border.