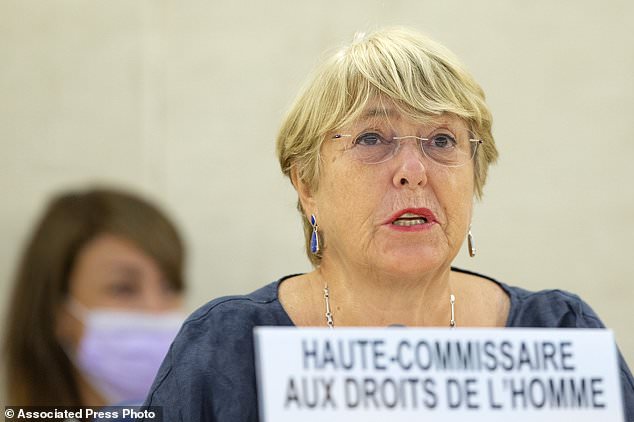 U.N. High Commissioner for Human Rights Michelle Bachelet addresses her statement, during the 48th session of the Human Rights Council, at the European headquarters of the United Nation, in Geneva, Switzerland, Monday, Sept. 13, 2021. (Salvatore Di Nolfi/Keystone via AP)

NAIROBI, Kenya (AP) – The United Nations human rights chief on Monday said a highly awaited joint investigation into abuses in Ethiopia´s Tigray conflict was unable to deploy to the site of one of its deadliest attacks, the alleged massacre of several hundred people in the holy city of Axum.

Michelle Bachelet told the U.N. Human Rights Council that deployments to eastern and central Tigray, where witnesses have accused Ethiopian and allied forces from neighboring Eritrea of some of the worst abuses of the 10-month war, “could not proceed.” She cited “sudden changes in the security situation and in the conflict dynamics.”

She did not give details. The war saw a dramatic shift in late June when the Tigray forces retook much of Ethiopia´s northern Tigray region and Ethiopian and allied forces withdrew. Since then, witnesses have said much of Tigray has been far safer and more accessible within the region.

The shift in the war occurred about midway in the work of the joint investigation by the U.N. human rights office and the government-created Ethiopian Human Rights Commission, carried out between May 16 and Aug. 20.

The joint report will be published on Nov. 1, a delay from its once-expected release this month.

A joint statement last week said the team conducted investigations in the Tigray regional capital of Mekele as well as the communities of Wukro, Samre, Alamata, Bora, Maichew, Dansha, Maikadra and Humera in the southern and western parts of the region. The team also investigated in Gondar and Bahir Dar in the neighboring Amhara region along with Ethiopia´s capital, Addis Ababa.

The war continues to cause great concern over Africa´s second most populous country, where all sides have been accused of atrocities. Bachelet noted that “mass detentions, killings, systematic looting, and sexual violence have continued to create an atmosphere of fear and an erosion of living conditions that resulted in the forced displacement of the Tigrayan civilian population.”

Now hundreds of thousands of people are newly displaced elsewhere after the Tigray forces brought the fighting into the Amhara and Afar regions.

“If the situation does not improve Ethiopia will be the scene of a human tragedy on a scale unparalleled this century,” British Ambassador Rita French told the human rights council, adding that Ethiopia´s government is “presiding over a de facto blockade of Tigray” where 400,000 now face famine conditions.

Ethiopia´s attorney general, Gedion Timothewos Hessebon, told the council that because of the cutoff date of the joint investigation, the team didn´t probe recent reported killings in places such as the Amhara community of Chenna Teklehaymanot.

The attorney general also criticized a separate investigation by the African Commission on Human and Peoples´ Rights, an African Union body, as unilateral and “hence not recognized by the government of Ethiopia.”

That body´s report will be available by the end of the year, the commission of inquiry´s vice chairman, Remy Ngoy Lumbu, told the council.