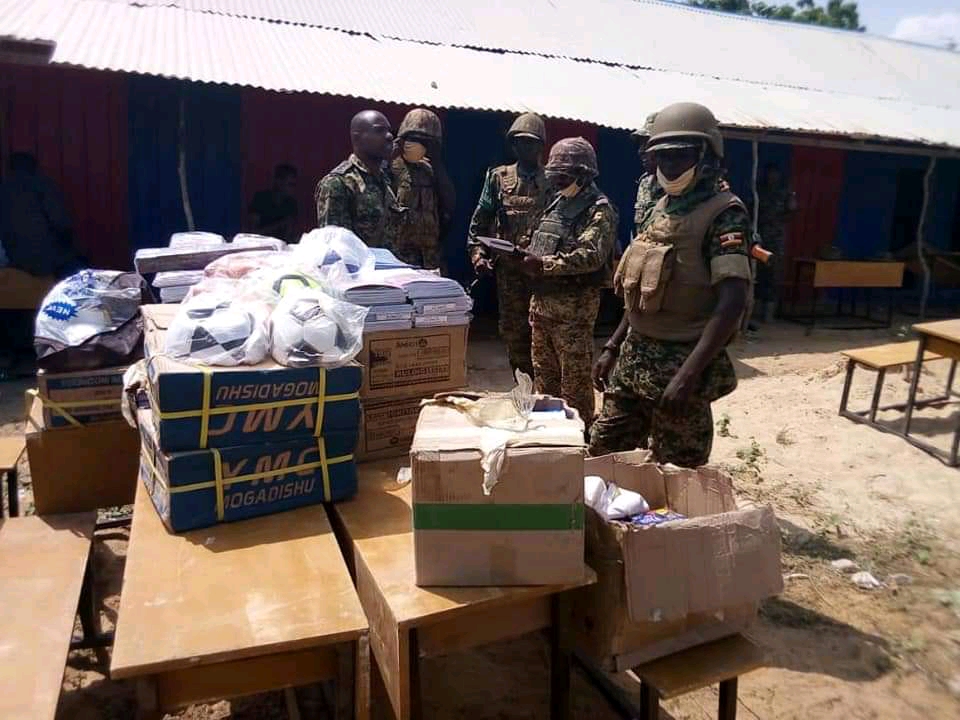 Officers parade some of the scholastic items donated by the UPDF to Embresso Primary School in Somalia (PHOTO/Courtesy).

This, according to the Force, was an effort aligned towards improving the education standard in Barawe district in South West State region of Somalia.

“We have been able to maintain security and peace because of your good cooperation which should continue for the development of Barawe and Somalia at large,” Col Edward remarked.

He stressed that the presence of relative security and peace will accelerate the community’s socio-economic transformation as well as the education sector.

Col Kaddu advised the school authorities to take advantage of the school items received and use them to promote education that will guarantee the stability of future generations.

The Deputy District Commissioner (D/DC) Embresso Umar Abdulzak commended AMISOM for the role played in maintaining peace and stability in the region and Somalia at large.

He thanked AMISOM for the donation and pledged to take good care of items received to improve and boost the quality of education in the region.

He also praised the good discipline and professionalism exhibited by Uganda troops in sector one, while executing their duties and promised continued cordial relations.

The Civil Military Cooperation (CIMIC) Officer Capt Obed Mbarebaki said that the donation is part of AMISOM’s CIMIC activities in the area aimed at both promoting quality of education and strengthening good working relations.

He said that AMISOM has always been supportive in the provision of health care, clean water, education equipment, road maintenance among others.