Villa Somalia calls Puntland, Jubaland back to the bargaining table 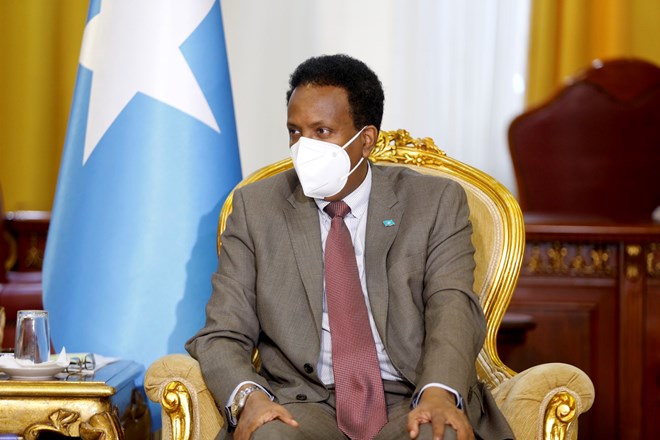 Mogadishu (HOL) – In a bid to break the electoral crisis Villa Somalia has extended an invitation to Puntland and Jubaland to join the electoral consultative meetings, according to a statement on the government website.

Once again, the Presidency of the Federal Republic of Somalia calls on the Presidents of Puntland and Jubaland to join the consultative meeting to finalize the recommendations agreed upon by the Technical Committee in Baidoa on 15-16 February 2021,” reads the statement in part.

The statement says that all regional governments must work together to implement the September 17 agreement.

President Farmajo met with The presidents of Galmudug, Hirshabeelle, South West State and the governor of Benadir region on Sunday to discuss the electoral deadlock. However, the elephant in the room was the noticeable absence of Jubaland President Ahmed Madobe and Puntland President, Said Abdullahi Deni.

Jubaland and Puntland have found each other as strong allies against Farmajo’s attempts to centralize power. Meanwhile, the presidents of South West State, Galmudug and Hirshabelle, are all seen as compliant allies of President Farmajo.

The invitation comes barely a day after the Jubaland government laid out a series of prerequisites to the federal government before electoral talks can begin. Most notably, Jubaland demands that President Farmajo not play a role in the electoral process. It also called on the federal government to formally apologize to opposition candidates for opening fire on protestors and suggested a new venue to hold the talks so that all the stakeholders can be present.

It also comes as Said Abdullahi Deni, the President of Puntland, delivered a blistering off-the-cuff rebuke of President Farmajo. For over an hour, Deni blasted Farmajo as a dictator who has purposefully sabotaged the election process. Deni also said that Farmajo intends to use the military to stay in office.

Somalia’s federal government did not lay out a proposed timetable or venue for the meetings.